How big is 6mm mole

so the restoration of the inner workings is now almost complete. And what can I say ..... there were some unexpected and interesting errors.

For my own safety, I operated the radio via an isolating transformer.

But before it really started ... Checked the radio's voltage selector switch, and then set it to 250V. Yeah hmm and since the soldering iron was nice and warm I quickly exchanged the old power rectifier and the blocking capacitors + (as advised) the mains fuse.

Then the main charging capacitor was briefly measured. 32µ it should have 25µ I measured, well a little bit, so quickly another 47µ 400V parallel soldered next to it. (There are 3x32µ in an aluminum sheet pot) I found the other two ok (for starters).

As a first step, I removed all tubes and then systematically inserted them in order to be able to examine each function block (input stage, band filter, control stage, output stage) individually.

I started with the power amplifier. Consists of a triode (EABC80) preamplifier and a pentode output stage with EL84. Nothing special in itself. However, I noticed the following for a closer examination, or for possible sources of error:

.Triode of the EABC80: grid bias over 10M by starting current. (R's like to age)

But as I already wrote in the first post, the power amplifier sounded really scary and distorted relatively quickly. There had to be a reason for that. So again quickly fed a signal externally into the diode connection (what else are the connections there for) and listened to the sounds that now swung out of the loudspeaker ... and well, an ABBA turned into scrabble. Pooh

So I measured the specified voltages and currents for the operating points of the tubes. The EL84 was inconspicuous, whereas the EABC80 got a little out of hand. And since nobody rows anywhere with me without asking me beforehand, I simply swapped the grid resistance of 10Meg and the coupling capacitor of 10nF for something newer models. I also swapped the 1µ Siebelko on the 100K series resistor for the anode voltage supply. Then measured again. The 10meg still had 8meg, well not that bad. The 10nF coupling capacitor (winding in the glass tube with tar pasted up and banderole drum) worried me ... only 4.4nF ... so far too little. Visually it looked good ... at least much better than some of the other tar bombs that were still dormant here.

(Incidentally, there is the circuit diagram and overview images, etc.) 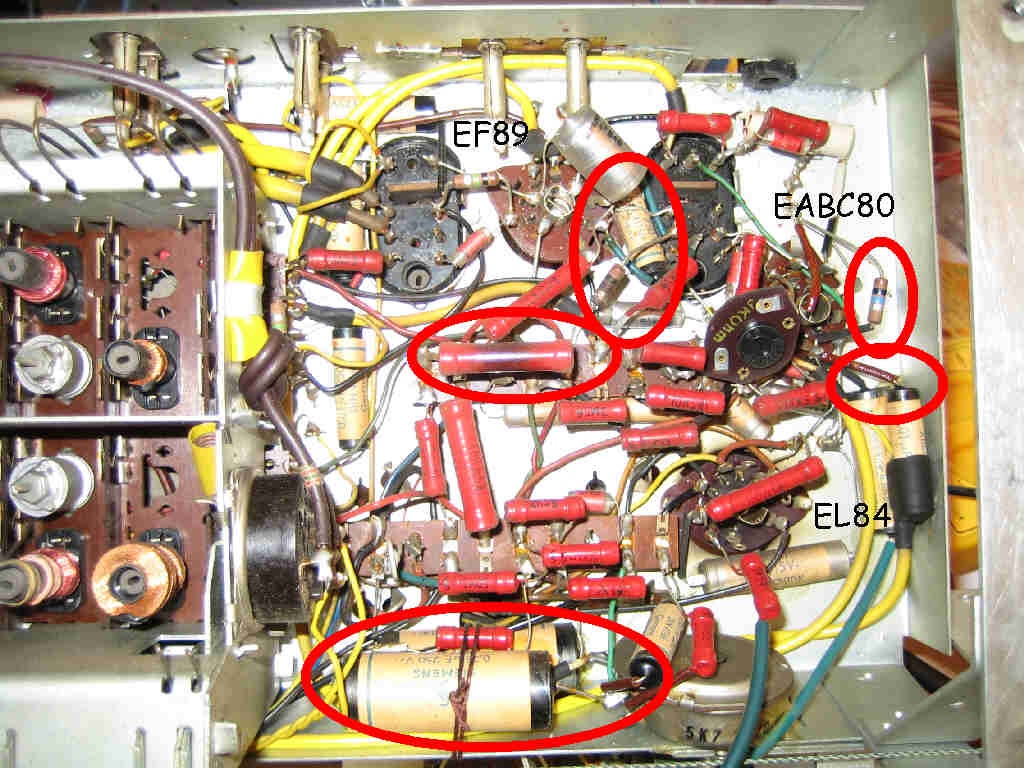 So I just swapped all the capacitors in the power amplifier area. And what I have now measured (extra measuring device for capacitors from DC to 200KhZ), I did not even begin to expect. None of these tar capacitors even came close to their printed capacitance. The deviations were in the range of + -50% up to + 1000% !!!! Whereby I found the deviation of + 1000% upwards particularly interesting. This capacitor (Siemens 0.25µF 250V) in the current negative feedback from the transformer had 2.15µF!

The identical (Siemens 0.25µF 250V) capacitor below the volume pot brought it to 0.31µF. So still within the acceptable tolerance range.

Are there any explanations for such an increase in capacity? I am happy to make these copies available for further investigation in case anyone would like to know more.

After this intervention, the power amplifier plays as it should.

So now it was the turn of the EF89. Put it in and measure it. Hmm no trace of the desired 226V anode voltage at 8mA. Much too little. Weird weird. There were also different bubbling noises in the loudspeaker when approaching the area of ​​the EF89. Furthermore, the nicely tanned 60K resistor is noticeable, as well as a 0.01µF capacitor, in which the tar oozes out of the tube. ( see image ). Also a 1Kohm resistor next to it looks kind of weird. So out with the components and re-measured. And what can I say ... the next surprise. The 0.01µF capacitor turned out to be a 1.6Kohm resistor and the 1K anode resistor was high ohmic. The anode current crawled over the 60K screen grid resistor and then over the capacitor, which had mutated to 1.6KOhm. The grid leakage resistance also showed weaknesses. 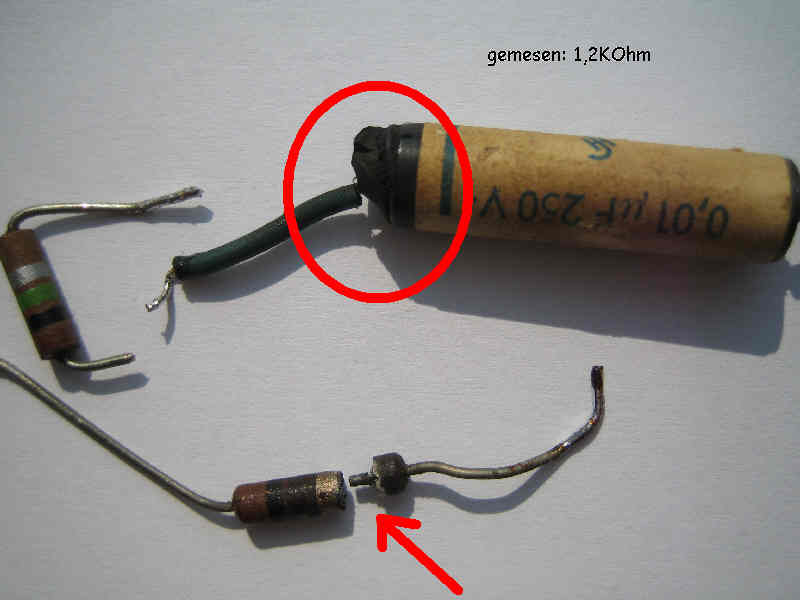 After replacing these components, the desired operating point was set in the area of ​​the EF89.

Since I've only had bad experiences with this type of resistor and capacitor (picture) so far, I simply swapped all capacitors and resistors of these types in the entire radio. As well as all electrolytic capacitors.

Now I wanted to know, and I fitted the rest of the tubes. Their AP quickly measured, everything OK, then a piece of wire as an antenna plugged into the socket and fiddled with the transmitter button ...

times the new set of tubes wait and see there are still tonal improvements in it.

I fumble around the base of the EM80 so carelessly, and then I notice something ..... There is another type of resistor that you had bad experiences with before ... but is well hidden. Well ... unsoldered, measured ... nothing ... Aha such a pig ... Briefly punched into the circuit diagram. He should have 1Meg. Oh no is a little too much for me. 500K soldered in. Excitement on it ...

well the EM80 is end of its life. Extremely faint, but something is still moving.

The getter is also running out. 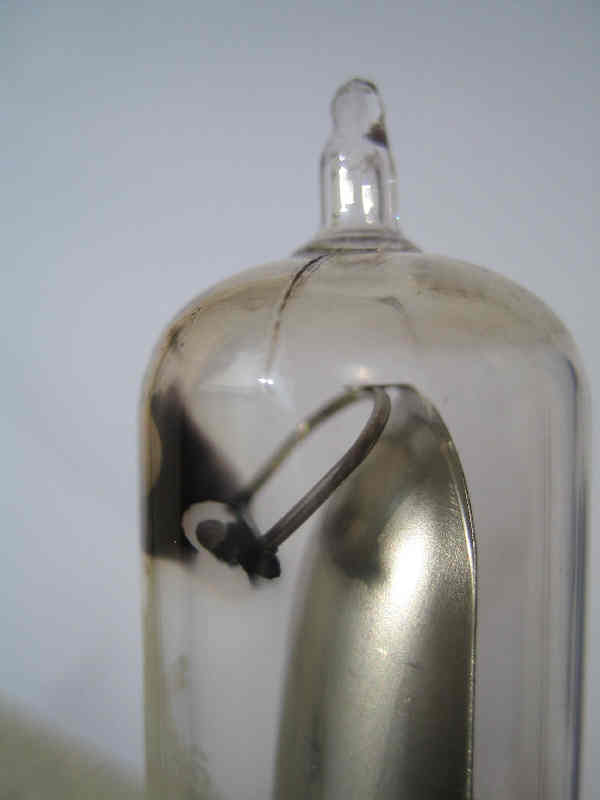 and since I wanted it to be nice and colorful, I soldered in everything that could be found on usable capacitors. The result is a beautiful, colorful box. 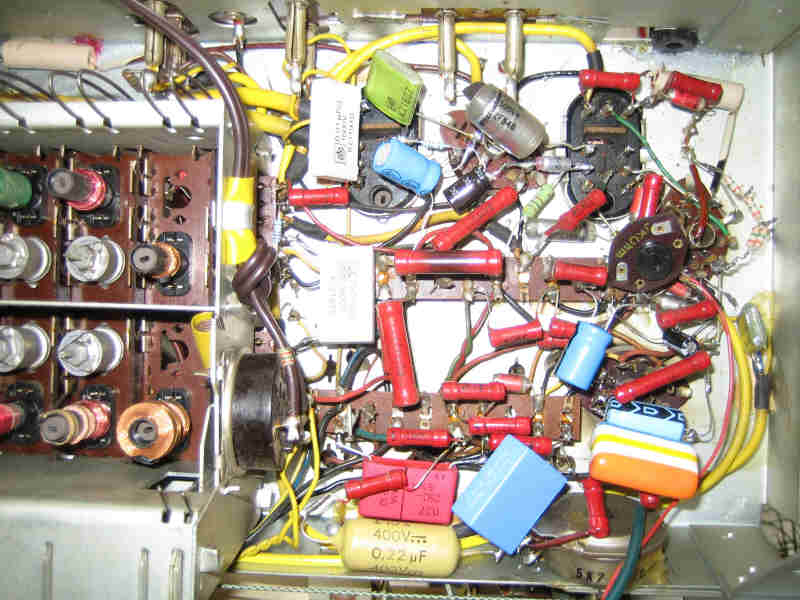 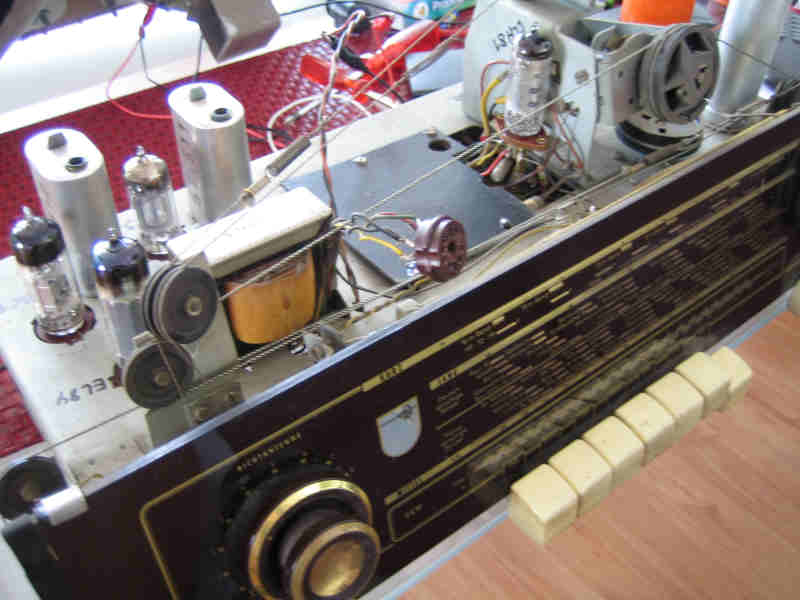 Have a good time

Corrected the image width (max. Width 560 pixels !!!) and moved the contribution to the model.
Wolfgang Bauer